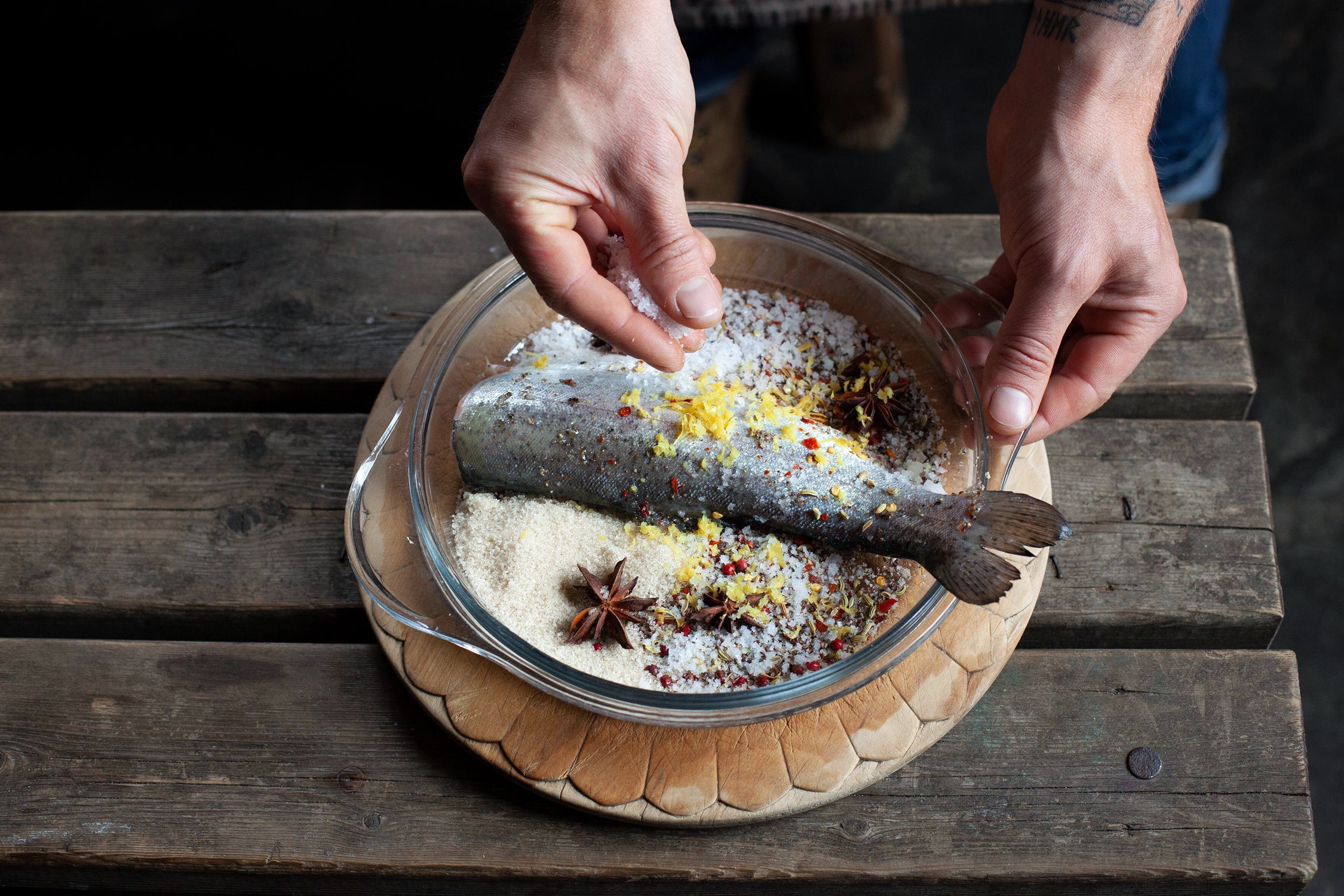 My job is to help chefs write cookbooks, but I bumbled into the occupation with little culinary skill of my own. A specialist in preparing undercooked chicken, overcooked salmon, and incinerated broccolini, I am as familiar as any lay person with the myriad ways in which written instruction can fail amateurs in the kitchen. The goal of a recipe would be to bridge the experience of a person who has already mastered a dish with that of a person who would like to make it for dinner. The key to writing a good one lies in assessing the size of the chasm and identifying the information necessary to shrink it—yet there is no closing it completely. Too many variables are impossible to control. One stovetop burner’s medium-high is another’s medium-low. Two and a quarter pounds associated with winter squash might be sugary sweet one time and bland the next. Detail must be sacrificed to the brutal spatial constraints of print publishing: “mix until dough forms. ” What’s more, culinary technique often requires the sort of nuance that defies verbal description, as anyone who has ever attempted to explain the pleating of dumpling wrappers can attest.

Certain vital duties are especially ill-served by the convention of vague summary, foremost among them the matter of seasoning. Perhaps more than any other isolated task, this one can either clinch or derail what you’re cooking. You may have scrupulously sweated onions until translucent plus simmered lentils until soft, but if you serve your resulting soup without sufficient lemon and salt, or with too much, then the rest of your effort was for naught. So it’s a shame that for this pivotal step—after you’ve applied the prescribed teaspoons plus tablespoons but before you deem the dish ready to serve—we cookbook writers tend to abandon readers using the murky dictum “season in order to taste. ” Tacked on to the end associated with countless recipes, the turn of phrase is so ubiquitous that it has transcended the particular realm of culinary training to achieve a kind of broad cultural resonance. Good luck finding restaurants named Dredge in Flour or books titled “Drain, Discarding Solids, ” but you can dine at Season to Taste, an eatery, in Cambridge, Massachusetts, and there’s both the novel (about a woman who kills and cooks her husband) and a memoir (from an aspiring chef that temporarily loses her sense of smell) with the same name. “Salt to Taste”—a common variation focussed on the most fundamental seasoning—is the name of a 2009 cookbook by Marco Canora, the chef and owner of the Manhattan restaurant Hearth, in which the phrase serves as a shorthand for the notion that will great cooking is a matter not associated with formula but of time-honed intuition. “The best cooks I know rely mainly on their senses, ” Canora writes in the book. “They taste, smell, listen, and watch what they’re cooking in order to determine what is needed to achieve the effect they want. ”

I’ll admit that I often daydream of one day becoming the sort of cook who can assess the duck breast’s doneness with all the gentle prod of a fingertip or determine, as the legendary Italian cook Marcella Hazan allegedly could, whether a dish is properly salted by smell alone. But in reality spices “to taste” strikes me as code for an aspirational aptitude that I and most others will never acquire. Rather than a phrase of welcome encouragement, the rousing “The rest is up to you!, ” it seems like a form of desertion, a shrugging “You’re on your own from here. ” The underlying problem might be the mistaken implication that my taste can be relied on. As the late Judy Rodgers creates of flavoring in the exceptional “ Zuni Cafe Cookbook ”: “Recipes do not make food flavor good; people do. ” Yet We, like most individuals I know, prepare in terror of overseasoning, with the result that I end up chronically underseasoning—better mediocrity served with Maldon and lemon wedges on the side, I figure, than a good irrevocable fiasco. Often , I’ve watched the chef taste a meal that’s near-complete, mutter that it needs a little more salt, then grab a handful the size you might use if you found yourself in a fight with a very large man on a beach and wanted to fling sand into his eyes. Dumbstruck, I always watch the avalanche of kosher crystals fall into the pot plus wonder how on earth this person may consider herself a professional when she’s produced a saline sludge—until the chef offers me a taste, and it is better than I’d imagined it could be. But in my own cooking cowardice prevails.

The best cookbooks devote space, typically in the preface, to imparting the authors’ accumulated wisdom on fundamentals such as seasoning. Samin Nosrat’s 2017 cookbook, “ Salt, Fat, Acid, Heat , ” devotes almost forty pages to the varieties, scientific properties, and applications of salt, encouraging us to “develop a sense for salt simply by tasting everything you cook, early and often. ” Rodgers recommends that at home cooks carve out an exploratory portion of whatever they’ve made, after that “add a little of anything you suspect is lacking (it’s O. K. in order to guess), flavor again, and ask yourself if you like it better. ” Such advice feels somehow both self-evident and revelatory, plus seems meant to cultivate the kind of cooks who else no longer diligently follow quality recipes at all. I’m all with regard to improving future dinners, yet what if I want to eat well tonight? The kind of recipe I am eager to follow contains all the directions necessary to make the meal, no page-flipping or prior study required.

I worked on one recipe book, Andy Ricker’s “ Pok , ” that underscored the need to creatively tailor spices advice. Most of the dishes featured in the volume are popular in Thailand but unfamiliar to many Westerners. Accordingly, we hired a recipe tester with only a passing familiarity with Thai food, to cook each dish as instructed and report her results. In a typical note, she described the particular flavor associated with kaeng khanun , the Northern Thai curry of young jackfruit, as “a little strange, ” then suggested that we consider adding some sweetness or acidity to the recipe. Yet the kaeng khanun that will Ricker has been re-creating exists in a very particular register—and, sure, might seem a little strange in case you had been expecting green curry. Our tester’s reaction reflected a failing not on her part but on ours. Her comment prompted us to include a description of the intended flavor profile of each dish alongside its recipe—for the kaeng khanun , “salty, earthy, herbaceous, meaty, slightly tart”—so at least there was a target at which to aim.

Still, that’s not quite the same as guiding readers through the process of seasoning. When I worked with Roberto Santibañez, a chef and restaurateur from Mexico City, I learned the difference that proper seasoning can make when preparing pico de gallo, a dish I’d previously known mostly as a meek collection of chopped tomato, onion, and cilantro that came with my fajitas at Tex-Mex chains. When we cooked together to develop recipes, Santibañez would dice and sprinkle while I did my duties, occasionally thrusting measuring spoons in his face plus recording the amounts of each ingredient that he used. After he had added what I considered to be a concerning amount of seasonings—two tablespoons of lime juice, one and a half teaspoons of salt, and two minced jalapeños for just the cup and a half of diced tomatoes—he invited me to try the result. To my taste, it was perfection, a vibrant wallop of a salad that I’d have been happy to eat by the heap with tortilla chips. Yet Santibañez wasn’t done. He told me that if I could consume pico de gallo comfortably by the chipful, the condiment wasn’t sufficiently seasoned. This individual continued adjusting and tasting, ultimately adding enough lime, salt, and chili to the mixture to serve its intended purpose: to ignite a bowl of beans or the meat tucked into a tortilla with just a small spoonful.

Yet I must confess that, when it came to writing out recipe instructions in both Ricker’s and Santibañez’s books, we once again fell back on the phrase “season in order to taste. ” Out of guilt for my dereliction plus out of a desire to share the joy of Santibañez’s pico de gallo made properly, I revisited the formula recently, in addition to, with his permission, I present it here with an attempt at offering more guidance. The final all-important step is still up to you, but it’s Santibañez’s taste you’re seasoning to.

This recipe is adapted from “ Truly Mexican , ” by Roberto Santibañez.